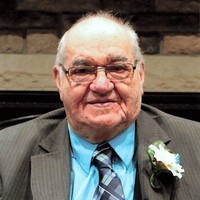 The Mass of Christian Burial for Alfred "Fritz" will be 10:30 AM Monday, December 23, 2019, at Church of the Resurrection with Rev. Father Phil Gibbs as the Celebrant. Entombment will be in Mount Calvary Cemetery Mausoleum.

Alfred was born December 8, 1928, in Durango, IA, the son of Martin and Katherine Krug Behnke. On August 25, 1953, he married Loretta Stecher in SS. Peter & Paul Catholic Church in Sherrill. They were blessed with 66 wonderful years together.

He was a U.S. Army Veteran, serving during the Korean War.

He was a member of Church of the Resurrection, and UAW local 94.

In lieu of flowers, memorials have been established for Hospice of Dubuque, and the Building a Visible Presence Resurrection School Capital Campaign.

A special thank you to Stonehill Care Center and Hospice of Dubuque, especially Jessica for their loving care.