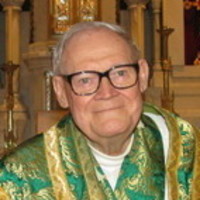 The Mass of Christian Burial for Rev. McAndrew will be 11:00 AM Monday, November 4, 2019, Cathedral of St. Raphael celebrated by Archbishop Michael Jackels and priests of the Archdiocese of Dubuque. Burial will be in Mount Olivet Cemetery in Key West. Full military honors will be rendered by the Dubuque Honor Guard.

Father was born November 18, 1931, in Dubuque, the son of Thomas A. and Lucille Duggan McAndrew. He graduated from Loras College and took his theological training at Mount St. Bernard Seminary in Dubuque.
He served in the Korean War with the U.S. Army. After Seminary, he then was ordained on March 18, 1961 at the Cathedral of St. Raphael. He was first assigned to All Saints in Cedar Rapids in 1961, he also served in 1963 in Charles City and Clear Lake until 1968. Father later served as an Army chaplain from 1968-1977, retiring as a Major, serving in Vietnam from 1969-1970. In 1975, Fr. McAndrew was one of the first of the Congregation of the Mother of the Redeemer special benefactors in the United States, who helped CRM Vietnamese Priests and Brothers in many ways, especially in finding an excellent sponsor and in resettling them in Carthage, MO. Father continued a close relationship the remainder of his life, attending many of the Congregation's events in Carthage. After separation from the USA Chaplain’s Corp in 1975, Fr. McAndrew returned to the Archdiocese and was assigned to the Team Ministry at Mason City, 1977-1985. During this time, he was also appointed as administrator of St. Patrick Parish, Dougherty. In 1985, he was named as an Associate Pastor at St. Wenceslaus and St. Ludmila, both in Cedar Rapids. He also served as a part time teacher at LaSalle High School in Cedar Rapids. He served as pastor of St. Joseph Parish, Waterloo, 1987-1995, the last year serving also as part-time Chaplain of Covenant Medical Center. He served as pastor of Sacred Heart Parish, Manly, and St. Michael Parish, Plymouth, 1995-2001. Fr. McAndrew retired in July 2001.

Following Father's retirement in 2001, he remained very active in his priesthood in Dubuque and the surrounding area. He offered Masses, both weekly and as a substitute, for many years at: Church of Nativity, Power of Prayer Chapel, Alverno, Ecumenical Towers, St. Mary's in East Dubuque, the Tridentine Latin Mass weekly at the Basilica of St. Francis Xavier in Dyersville and, until recently, offered daily Mass for the residents of Bethany Home, where he resided. In retirement, he was also very actively involved with Bible study and prayer groups in the area. In 2018, Father was presented with the St. George Emblem, a coveted award based on his years of service to the efforts of Catholic Scouting. He was a 4th Degree Member of Knights of Columbus.

Survivors include his brother-in-law, Richard C. Burdick of Dubuque, and numerous nieces and nephews.

He was preceded in death by his parents, one brother, Herbert J. McAndrew and his wife Adeline, two sisters, Cecilia M. Vigil and her husband, Samuel, and Kathleen Burdick.

A memorial has been established for Father’s favorite charities.

Special thanks to the dedicated nurses and staff at Bethany Home for their compassion and loving care for Father McAndrew during his residence.