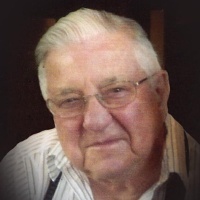 Alfred August Schmitt 93, of Dubuque passed away Tuesday, September 3, 2019, at his home surrounded by his family.

Friends may call from 3:00 PM until 7:00 PM, Friday, September 6, 2019, at the Hoffmann Schneider and Kitchen Funeral Home and Cremation Service, 3860 Asbury Road, where there will be a Wake Service at 7:00 PM. The Mass of Christian Burial for Al will be 10:30 AM Saturday, at Holy Spirit Parish, Holy Ghost Catholic Church with Father Steven Garner as the Celebrant. Entombment will be in Mount Olivet Cemetery Mausoleum, Key West.

Al was born September 28, 1925 in Dubuque, he was the son of Alfred J. and Hilda (Koester) Schmitt. He grew up as a child of the great depression. He never complained about how difficult life was growing up but did what was needed to help his family survive day to day. He was strong willed, hard-working, loving and smart, both street and intellectually. As a young man he grew up quickly with a sense of responsibility to his mother and siblings.

He then met Virginia Hirsch, the love of his life, married November 8, 1947 at Holy Ghost Catholic Church, Dubuque. and started a family. He approached family life as he did with his early life, with love, a fierce sense of responsibility and a need for a bit of adventure.

He was employed as a pattern maker at John Deere Dubuque Works for 37 years. He retired in 1983.

His family fondly remembers the many Western trips with his wife, children, and in-laws in tow, always ending in San Francisco to visit his mother and brothers.  He also loved salmon fishing, playing cards with his friends, watching the St. Louis Cardinals and spending time with his grand children and great grandchildren. He will be lovingly remembered and terribly missed.

He was a member of Holy Spirit Parish, Holy Ghost Catholic Church, the Pattern Makers League of NA, and the Moose Lodge.

He was preceded in death by his parents, a daughter, Georgia Betsinger, one brother, George Schmitt and a brother-in-law Jack Kennedy.

The family would like to give a special thank you to the nurses and staff at Finley Hospital, St. Croix Hospice and the Hospice of Dubuque especially Paul his nurse, for their loving care and support of Al.