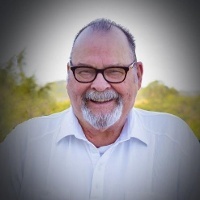 Born February 11, 1943, in Dubuque, he was the son of Burton and Rosemary Schlampp Boyes.  Bill married Carol Ann Buol, the love of his life, on April 5, 1969, at First Presbyterian Church in Dubuque. Bill and Carol were happily married for 38 years and were devoted to each other and their family. She passed away November 1, 2007.

Bill was a 1961 graduate of Dubuque Senior High School.

He served our country in the U.S. Army and was honorably discharged in March of 1969. He had worked for 30 years at John Deere Dubuque Tractor Works, retiring in 2002.

He was a member of Immanuel Congregational United Church of Christ, the American Legion, and UAW Local #94. He was an avid fan of the Green Bay Packers, Los Angeles Dodgers, and the Boston Celtics, and especially Larry Bird. Bill and Carol spent many summers with the Dubuque Colts Drum and Bugle Corps as Chaperones, Chief Cooks, and Bottle Washers. Bill was a semi-permanent fixture at the Q Casino, (aka “the dog track”) as he always called it and made sure to go down when he had “5 bucks to spend”. In his younger years, he enjoyed playing fast pitch softball, bowling, camping at the Palace Campgrounds in Galena, playing cards with many friends and of course, being the designated grasshopper maker for all of the Buol Family Christmas gatherings.

Bill is survived by two sons, Douglas (Lisa) Lineen, of Cheyenne, WY, and Nathan (Jennifer) Boyes of Dubuque; one daughter, Elizabeth (Don) Lundy, of Lake Mills, WI; four grandchildren, Jacob and Leah Boyes, Tiffany Fischer, and Trent (Jess) Eastman; two great-grandchildren, Logan and Brantley; and numerous nieces and nephews and “Outlaws” who treated Bill like he was a brother.

Besides his wife, he was preceded in death by his parents, and one daughter, Stefanie.

The family would especially like to thank Dr. Kirkendall and his nurse, Kate, along with all of the other nurses and staff at their office as well as the Unity Point staff at Finley Hospital for taking such good care of Bill over the years.